Arkham was a surprisingly hard box for the 30 points that were awarded for it, as I was struggling quite a bit, especially for the user part. However in the end i enjoyed the box a lot because it forced me to use stuff I don’t encounter often and therefore was a great learning experience. Techniques used are the exploitation of java deserialization vulnerability, traffic tunneling via aspx and an UAC bypass.

On “BatShare” we find a single zip archive called “appserver.zip” which we download. After unzipping we get a file called “backup.img”, where we run file on and see that it’s a luks encrypted disk image.

I tried some default passwords but could not get it to decrypt so I used binwalk -e on it which surprisingly gave some usable files! To be honest I don’t really know why there would be clear text files in a luks encrypted image, maybe this situation was created artificially. In the extracted image we find a folder “Mask\tomcat-stuff” in which we see several configuration files, one of them being “web.xml.bak”. That files contains some relevant information:

This looks like something in tomcat is encrypted and has an hmac with the sha1 algorithm. We also learned that there is some kind of java faces application on tomcat so it’
s time to look at port 8080. We find a website there with a lot of dead links, but one of the linked pages catches the eye (http://arkham.htb:8080/userSubscribe.faces):

When we enter something and send it through burp we see the following request:

The goto tool to exploit these kind of vulnerabilities is ysoserial, which can be used to create deserialization payloads for various libraries. However there remain 2 major problems – we have to find out which library is being used by the faces application and we have to encrypt the payload, generate an hmac, base64- and url encode it.

First of all I wrote a script that does the crypto and encoding which you can find here. Then, since I did not know much about the application I generated all of the ysoserial payloads, fed them into the script and then into burp. The payload that finally did it was generated like that:

The payload just downloads the 64-Bit version of netcat from our attacker box onto the target via powershell. After sending the payload we get a request on our local python webserver and see that the payload indeed worked.

Now we generate another payload that executes nc64.exe and get a shell as user “Alfred”:

As Alfred we can now read the user flag.

In Alfreds “Downloads” folder we find a file called “backup.zip” which we download and analyze. The contained file is called “alfred@arkham.local.ost” and a quick file on it reveals its type:

A quick convert via readpst -rS reveals the following content:

The image has the password of batman in it, which is Zx^#QZX+T!123. However as it turns out we can’t do too much with this password after all. It’s possible to connect via SMB to the Users share (what we did earlier anonymously), which confirms that the passwords works but I didn’t find any interesting files in it. When we look at the the user batman we notice that he is in the “Remote Management Users” group, which is the group windows uses for WinRM users:

ince WinRM is however only listening locally we have to find some way to pivot. Thinking back to another recent box and seeing that on tcp port 80 we have IIS running we use reGeorg again to reach WinRM through a jsp tunnel. Getting the payload to work was a bit tricky since it got detected by windows defender. To make it work I changed some strings in the payload which to my surprise was enough too fool the av.

To get the proxy up we change the mentioned strings and upload the tunnel.jsp to C:\tomcat\apache-tomcat-8.5.37\webapps\ROOT. Then we adjust our local /etc/proxychains.conf to point to the local port (10000) we will start reGeorg on and then finally start reGeorg with python reGeorgSocksProxy.py -u http://arkham.htb:8080/tunnel2.jsp -p 10000. Now that the tunnel is running we use the ruby shell by alamot together with proxychains to connect to WinRM as batman:

It turns out the shell is actually pretty unstable and awkward so we create a scheduled task that connects back to us every minute (as user batman) to avoid using the tunnel more than necessary:

Sadly batman can’t read the root flag either. I was very lost on what is actually stopping batman from reading the flag or most other files that have full access for the administrators group that batman is a member of. After researching the issue for a while I found that it is actually UAC that is blocking most stuff that requires admin privileges. So how can we bypass it ? There exist several ways to bypass UAC, I found a nice blogpost by egre55 that has a bypass which abuses the library path load order of some windows binaries, effectively loading a malicious dll for us.

To exploit it we just have to create a simple dll and put it under “C:\Users\Batman\AppData\Local\Microsoft\WindowsApps\”. Then we call the binaries that can potentially load our dll…

…and wait for the bind shell specified in the dll to open. After a moment it opens, we connect to it via nc to localhost and can read the root flag.

This box was very challenging and fun for me, many thanks to MinatoTW for creating it.

We are solving Tenet, a 30-point machine HackTheBox that involves a simple PHP deserialization vulnerability, password reuse and a race... read more

Registry is a 40-point machine on HackTheBox that involves interacting with a docker registry to download a docker image and... read more

Control is a 40-point windows machine on hackthebox that involves a sql injection which we use to upload a webshell.... read more

We are solving Cereal, a 40-point machine on HackTheBox. For user, we will exploit a pretty tricky deserialization vulnerability in... read more

Rainbow is a medium difficulty machine that involves a SEH-based buffer overflow for user and a UAC bypass for root. read more 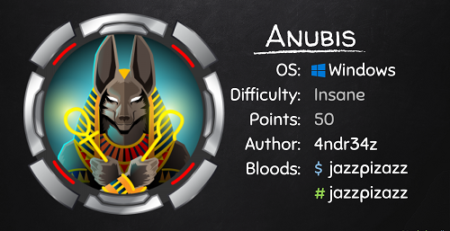 We are solving Anubis, a 50-point windows machine on HackTheBox which involves an ASP template injection, windows containers, and stealing... read more

Solving Luanne on HackTheBox. This is an easy 20-point machine involving a simple command injection and some password cracking. read more

Patents is a 40-point Linux machine on HackTheBox. For user we exploit an external entity injection in a word document... read more

Support me on Patreon!